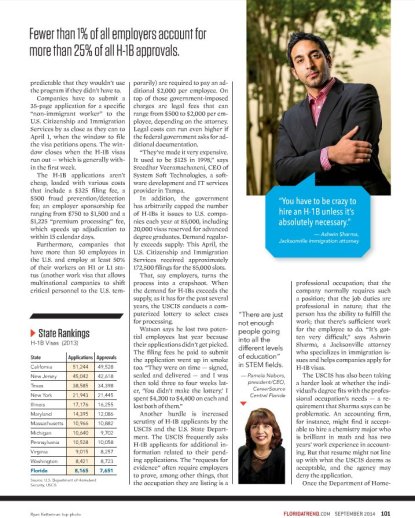 John Watson is president and chief technology officer of a small, Jacksonville-based IT consulting and software development firm. He employs about 16 computer IT consultants who specialize in design and development, project management, quality assurance and database administration. Salaries start at about $65,000 and climb upward of $100,000 a year.

Most of his employees aren’t American citizens. Most come from India. Some have permanent resident status (“green cards”), while others come here as guest workers on permits called H-1B visas. Watson says he advertises his openings on popular employment websites such as Dice, ComputerJobs and Monster.com but rarely finds qualified candidates from the U.S. “I haven’t had an American even sniff a job ad that I’ve run.

They’re not out there,” he says.

Another hurdle is increased scrutiny of H-1B applicants by the USCIS and the U.S. State Department. The USCIS frequently asks H-1B applicants for additional information related to their pending applications. The “requests for evidence” often require employers to prove, among other things, that the occupation they are listing is a Professional occupation; that the company normally requires such a position; that the job duties are professional in nature; that the person has the ability to fulfill the work; that there’s sufficient work for the employee to do. “It’s gotten very difficult,” says Ashwin Sharma, a Jacksonville attorney who specializes in immigration issues and helps companies apply for H-1B visas.

The USCIS has also been taking a harder look at whether the individual’s degree fits with the professional occupation’s needs — a requirement that Sharma says can be problematic. An accounting firm, for instance, might find it acceptable to hire a chemistry major who is brilliant in math and has two years’ work experience in accounting. But that resume might not line up with what the USCIS deems as acceptable, and the agency may deny the application.

Once the Department of Home Land Security approves an H-1B petition, the Department of State must then review it — a process fraught with uncertainty. Immigration attorneys contacted by Florida Trend say that the U.S. consulates in India, Canada and other locations have become much more aggressive in reviewing H-1B packages in recent years.

Denials aren’t uncommon. And Sharma says he also knows of several cases in which employees who have been working in the U.S. on H-1B visas and then return to their home country for a short visit have had their visas revoked and were denied re-entry in to the U.S.

The process has become so cumbersome that Veeramachaneni says his company stopped pursuing H- 1Bs for employees outside the country four years ago. Today, he says, his company only sponsors H-1B for individuals who are already in the U.S. on a student visa and have at least one year of work experience in the U.S.

Watson says he doesn’t under Stand why the U.S. makes it so hard to bring over highly educated, skilled workers who work hard, pay taxes and contribute to the economy. He hopes that Congress will eventually decide to toss the cap on H-1Bs.

“We’ve got 12 million illegal aliens in our country, but I’ll guarantee you we don’t have even one illegal IT alien in this country,” Watson laments. “There’s no way you could hire them. We go through just an unbelievable maze of government and homeland security regulations, immigration stuff that will blow your mind.””